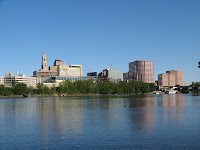 The state of Connecticut is home to the BioScience cluster, the Aerospace, Software and information technology, Metal Manufacturing, Maritime, Plastics, Agricultural, and Insurance and financial services clusters. These clusters symbolize the state’s diversified economy, and are evident in the companies that call Connecticut home.

1. The state of Connecticut has the largest per capita personal income in the country. In 2009 it was $54,397.
2. Connecticut exports for the year 2009 totaled $14 billion, the 11th largest exporter of merchandise in the country.
3. France and Canada were the main consumers of Connecticut total exports.
4. The Connecticut aerospace industry employs more than 44,000 people.
5. The state’s mineral resources include crushed stone and construction sand and gravel.
6. The tourism industry contributes $9.9 billion a year to the state economy and employs 146,000 individuals.
7. The metal manufacturing industry employs 127,000 people
8. 27 of the fortune 1000 companies are located in Connecticut.
9. United Technologies Corp. is the largest private employer in the state with 25,000 employees.
10. The state ranks third in percentage of population with Master’s, professional or doctorate degrees in the United States.

The following companies are headquartered in Connecticut:

General Electric Company (GE) is a diversified technology, media and financial company. It operates different segments worldwide. The company has an energy infrastructure segment, capital finance segment, technology infrastructure, GN NBC Universal segment, and a consumer and industrial segment. The stock has a market cap of $198.1 billion, a PE of 18, a PEG of 2.56, and it pays a yield of 2.2%.

United Technologies Corp. (UTX) is a worldwide provider of services and products to the building and aerospace industries. The stock has a market cap of $69 billion, a PE of 16, a PEG of 1.58, and it pays a yield of 2.3%.

Praxair Inc. (PX) produces and sells oxygen, nitrogen, argon and other rare gases. The company operates in North and South America, Europe and Asia. The stock has a market cap of $25.9 billion, a PE of 18, a PEG of 1.57 and it pays a yield of 2.1%.

Aetna Inc. (AET) is a company that provides medical, dental, pharmacy and group life insurance. The company operates various segments. The stock has a market cap of $14.5 billion, a PE of 13, a PEG of 1.36, and it pays a yield of 0.12%.

Priceline.com Incorporated (PCLN) is a travel company that operates online. It conducts business in the domestic market, Europe and Asia. The stock has a market cap of $11.8 billion, a PE of 25, and a PEG of 1.3.

Hartford Financial Services Group Inc. (HIG) is an insurance company. It serves customers in the United States and other countries. The stock has a market cap of $10.9 billion, a PE of 10, a PEG of 1.46 and it pays a yield of 0.7%.

Xerox Corp. (XRX) makes and sells document systems and provides services such as support. The company makes and sells copiers, printers, and software and fax machines among other products. The stock has a market cap of $9.1 billion, a PE of 13, a PEG of 6.529, and it pays a yield of 1.63%.

Amphenol Corporation (APH) produces and sells cables, fiber optic, electric and electronic connectors worldwide. The stock has a market cap of $7.4 billion, a PE of 19, a PEG of 1.1, and it pays a yield of 0.1%.

Pitney Bowes Inc. (PBI) is a worldwide provider of mail equipment and solutions. It offers equipment, supplies and software. The stock has a market cap of $5.1 billion, a PE of 10, and it pays a yield of 5.9%.