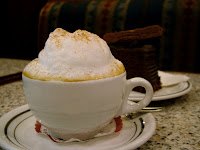 Here is some great news for coffee drinkers interested in losing weight. According to a recent study presented at the American Chemical Society's meeting in San Diego, participants in the study who took unroasted, green coffee bean extract lost in excess of 10% of their body weight on average, in less than six month. Please note: that's not ten pounds, that's ten percent. So for someone weighing 150 pounds, that's a 15 pound loss. For someone who weighs 250 pounds, it is a 25 pound loss.

The study analyzed 16 overweight adults between the ages of 22 to 46 years of age. The average weight loss was 17 pounds with a 16 percent decrease in body fat, with no side effects. Researchers at the University of Scranton believe that it may be due to the chlorogenic acid in the unroasted coffee bean. Unfortunately, roasted coffee has much less of this ingredient than unroasted coffee.

From an investor standpoint, there are many coffee companies available as investments. WallStreetNewsNetwork.com has recently updated its list of publicly traded companies in the coffee business, several of which pay dividends.

A major wholesaler of green coffee is Coffee Holding Co. (JVA), which also markets private label coffee and branded coffee in the US and Canada. The company has 90 varieties of raw green coffee beans which it imports from around the world and sold to large and small operators. The stock trades at 8.2 times forward earnings and pays a CD-beating dividend yield of 1.3%. Earnings for the latest reported quarter rose by an incredible 51.6% on a 120% increase in revenues. The company has $7.36 million in cash, giving the stock $1.16 in cash per share.

On the retail side, there is Peet's Coffee & Tea, Inc. (PEET), a specialty coffee roaster, marketer, and retailer founded in 1966 in Berkeley, California. The stock trades at 32 times forward earnings. Revenues for the latest quarter were up 10.9%, but earnings dropped by about 12.2%. The company does not pay a dividend.

Starbucks (SBUX) is the largest coffeehouse retailer in the world, with outlets in 50 countries and over 17,000 shops worldwide. The stock trades at 25.5 times forward earnings and pays a yield of 1.2%. Earnings for the latest quarter were up 10.2% on an 16.4% increase in revenues.

The J. M. Smucker Co. (SJM) sells the Folgers brand of coffee, along with spreads, toppings, and beverages. The stock has a forward price to earnings ratio of 15.2 and a very favorable yield of 2.4%. Earnings dropped 11.5% on an 11.8% rise in sales.

For a free list of about 20 coffee stocks, including more than half a dozen that pay dividends, go to WallStreetNewsNetwork.com. The list can be downloaded, sorted, and updated.

Disclosure: Author didn't own any of the above at the time the article was written.

Shany Paul said...
This comment has been removed by a blog administrator.
3:23 AM