The Latest on the Gisele Bündchen Stock Index

Gisele Bunchen is a Brazilian supermodel, celebrity endorser and spokesperson for numerous products of many publicly traded companies. She also happens to be the wife of American football star Tom Brady. Gisele is the top earning model according to Forbes Magazine. I have tracked the companies that Gisele has connections with and built those stocks into the form of a stock index, in order to compare Gisele's stocks with the Dow Jones Industrial Average.

The following graph shows the return for both since 2007: 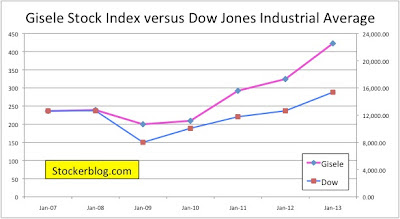 The Gisele Index is still outperforming the Dow Jones Industrial Average by a wide margin. The Gisele Index is up an outstanding 79% since January 2007, whereas the Dow was up only 22%. over the same period of time. I have been maintaining the same stocks in the portfolio to keep it consistent over time.

The stocks in her index include:

News Corp. (NWSA) Starred in the comedy, Taxi, in her movie debut, and The Devil Wears Prada, both produced by 20th Century Fox, a division of News Corp.

For a free list of stocks in the Gisele Stock Index, go to WallStreetNewsNetwork.com.

Assumptions:
The Gisele Index is a price-weighted index, similar to the Dow Jones Industrial Average. It includes reinvested dividends.


Disclosure: Author owned DIS and NWSA at the time the article was written. No celebrity endorsement expressed or implied.

By Fred Fuld at Stockerblog.com