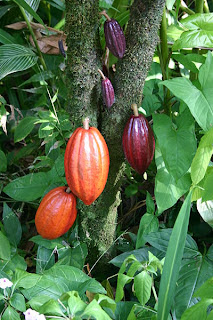 Now that Valentine's Day has just passed, maybe it is time to look at chocolate stocks. Here is some trivia about chocolate:
1. The earliest documented use of chocolate was approximately 1100 BC.
2. The Mayans and Aztecs made chocolate beverages.
3. It can affect serotonin levels in the brain.
4. It can lower blood pressure.
5. It has a substantial amount of antioxidants that reduce the formation of free radicals,
6. It is associated with the Mayan god of fertility and the Aztec goddess of fertility.
7. Cacao beans were often used as currency.
8. Two-thirds of the world's cocoa is produced in Western Africa.
9. 43% of cocoa comes from te Ivory Coast.
10. 50 million people worldwide depend on cocoa as a source of livelihood, according to the World Cocoa Foundation.

Hershey Foods (HSY) is a large chocolate and confectionery company, one of the largest in the world, made famous by its Hershey Bars. The stock has a P/E of 39, and a yield of 3.3%.

Cadbury Schweppes (CSG) is a London based confectionery and beverage company which was founded in 1783. Some of their products include cocoa powder and milk chocolate bars. The stock has a P/E of 24, a PEG of 2.61, and a yield of 2.5%.

William Wrigley Jr. Co. (WWY) not only makes chewing gum which it is famous for but also mints, candies, and other candy products. Last year, the company bought an 80% ownership position in A. Korkunov, a Russian premium chocolate company. The stock has a P/E of 25, a PEG of 2.66, and a yield of 2.3%.

Rocky Mountain Chocolate Factory (RMCF) is a very low cap Colorado based company which makes and markets chocolate and candy, including caramels, creams, mints, and truffles. The stock has a P/E of 15 and a yield of 3.5%.

Great facts about chocolate! Not only is it really tasty it is good for you too.