Bank Failures Up 250% for the Third Quarter 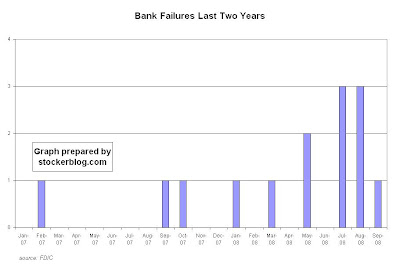 Another bank just bit the dust. Nevada based Silver State Bank was just closed down by Nevada regulators due to bad loans. The Federal Deposit Insurance Corporation was named as receiver. Andrew K. McCain, son of Republican presidential candidate John McCain, was on the bank's Board of Directors until July.

According to the FDIC, this is the seventh bank failure for the third quarter, an increase of 250% over the second quarter, and the quarter isn't even over yet.

By the way a lot of banks appear on the SEC Naked Short List.
Posted by Stockerblog at 8:03 PM