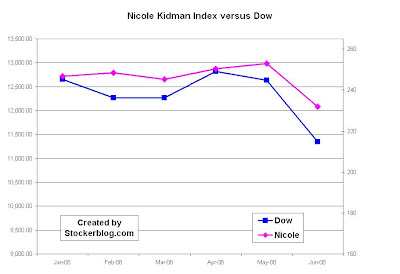 Nicole Kidman is the most overpaid actress in Hollywood, according to a recent report by Forbes Magazine.

News Corp. (NWS-A) which owns 20th Century Fox, distributor of the movies Australia and Moulon Rouge! in which she won a Golden Globe Award for Best Actress. Appeared in commercials for SKY Italia is an Italian digital satellite television platform owned by News Corporation.

Time Warner (TWX) Warner Brother's which distributed Margot at the Wedding, The Invasion, Happy Feet, in which she did a voiceover, Eyes Wide Shut, Fur, plus the New Line Cinema division's The Golden Compass.

Viacom (VIA-B) Paramount Pictures distributed Margot at the Wedding, The Stepford Wives, and The Hours, for which she won an Academy Award for Best Actress.

Disney (DIS) division Miramax distributed Cold Mountain, The Human Stain, and was the international distributor of The Hours.

Returns:
Over the six month time period shown, the Nicole Kidman Stock Index was down only 6.1%, versus the Dow Jones Industrial Average, which was down 10.3%.