Eva Longoria Speaks for Microsoft, Her Index Outperforms the Dow 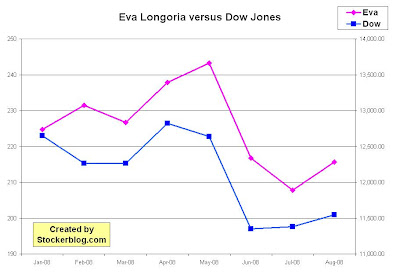 Last year, I developed the Eva Longoria Stock Index. Since Eva is now appearing on the new Microsoft (MSFT) TV commercials, replacing Jerry Seinfeld, I thought it would be appropriate to update her index for this year.

Starred in The Young and the Restless produced by Sony Pictures Television a subsidiary of Sony Pictures Entertainment, which is a division of Sony (SNE)

Returns:
Over the six month time period shown, the Eva Longoria Stock Index was down only 4%, versus the Dow Jones Industrial Average, which was down 8.7%.