Supermodel Gisele Having a Baby Girl, Outperforming the Stock Market 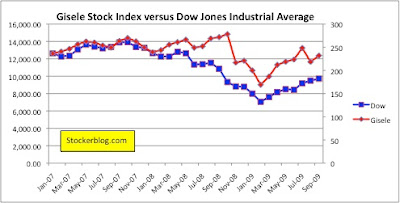 Gisele Bündchen, the richest supermodel in the world and wife of football star Tom Brady, is pregnant with a baby girl and is expecting in December. Gisele is connected to a lot of publicly traded companies, acting as spokesperson for their products. Tracking the stocks she is connected with from January of 2007, the Gisele Bundchen Stock Index has greatly outperformed the Dow Jones Industrial Average.

The stocks in her portfolio include:

News Corp. (NWS-A) Starred in the comedy, Taxi, in her movie debut, and The Devil Wears Prada , both produced by 20th Century Fox, a division of News Corp.

The Gisele Index is down only 2% for the last three years versus the Dow which was down 23%. By the way, Apple (AAPL) used to be part of her index because she appeared on the 'Get a Mac' advertisements to promote the new line of Macintosh's a few years ago. If Apple was still in the index, her return would be quite a bit higher.

Assumptions:
The Gisele Index is a price-weighted index, similar to the Dow Jones Industrial Average.