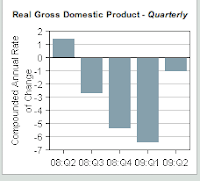 The government's report on the GDP has come and gone with no fanfare. Real Gross Domestic Product was down for the fourth quarter in a row. When I was in college, we were taught that one quarter drop in GNP (now GDP) was a correction, two to three quarters was a recession, and four or more quarters of a downturn is a depression.

However, over the years, the definition of depression has seemed to have changed and become more vague. Take a look at what Wikipedia says about depressions: 'a depression is characterized by its length, and by abnormal increases in unemployment, falls in the availability of credit, shrinking output and investment, numerous bankruptcies, reduced amounts of trade and commerce, as well as highly volatile relative currency value fluctuations, mostly devaluations. Price deflation, financial crisis and bank failures are also common elements of a depression.'

OK, looking at that description:
1. Length - four quarters in a row of GDP downturns
2. Abnormal increases in unemployment -close to 10% and way over that percentage in formerly strong states like California
3. Fall in credit availability - Yes, both individual and corporate
4. Shrinking output and investment - Yes (where have all the venture capitalists gone?)
5. Numerous bankruptcies - goes without saying
6. Reduced amounts of trade and commerce - definitely
7. Highly volatile relative currency value fluctuations - just look at the dollar
8. Price deflation, financial crisis and bank failures - Yes, yes, and yes

So, looking at all these factors, it seems very clear that we have been in a depression, albeit a short one in my opinion, as I see us coming out of it for the third quarter of 2009. Mark my words, we will look back in history on this time frame as a 'baby depression.'