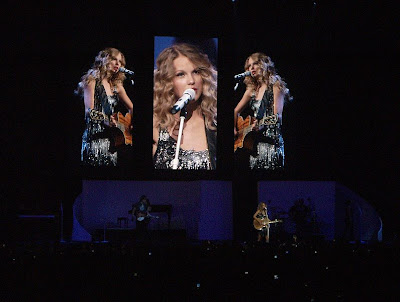 Taylor Swift is the famous country singer, winner of 40 awards, and made more famous by the incident with Kanye West at the 2009 MTV Video Music Awards. But she is successful for another reason. Taylor is connected to a lot of publicly traded companies, acting as spokesperson for their products, record labels, and movie distributors. Tracking the stocks she is connected with from January of 2009, the Taylor Swift Stock Index has greatly outperformed the Dow Jones Industrial Average, rising 40% for the year versus only 29% for the Dow. 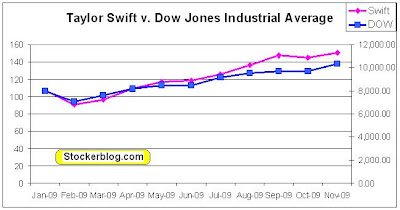 The stocks in her portfolio include:

Assumptions:
The Taylor Swift Index is a price-weighted index, similar to the Dow Jones Industrial Average.

By Fred Fuld at Stockerblog.com

Photo courtesy of wikipedia. No celebrity endorsement expressed or implied.
Posted by Stockerblog at 6:41 PM

I’m a huge fan of Taylor Swift. I like her songs because when you listen to her music, it makes you feel what she feels. Taylor Swift has always been one of my favourite country music artists and I couldn't pass up any opportunity to see her even if tickets are hard to come by. But I still go to her concerts & sing along to all her songs after founding this site
http://www.ticketsinventory.com/concert/taylor-swift-tickets/

Apart from celebrating her achievements as a nominee for 5 awards, Swifts has also jumped in the poll of her Fearless Tour, which will be joining Swift with tourmates Kellie Pickler and Gloriana.

Glad you agree. I will be updating this info soon.