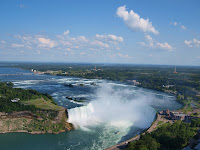 In spite of the fact that Standard & Poor's has lowered the rating on United States debt, Canada seems to be in good shape as Moody's has reaffirmed Canada's rating of AAA a few months ago. Probably because the banking crisis and housing crisis hasn't affected Canada as much as the US. For income investors looking for diversification, Canada has over a dozen stocks with yields in excess of 3% according the recently updated free list of top yielding Canadian stocks at WallStreetNewsNetwork.com.

Rogers Communications Inc. (RCI), a Toronto based communications and media company, yields 3.9% and trades at 11 times forward earnings. The company has increased dividends every quarter since 2008.

Canadian National Railway Company (CNI) has a network of about 20,600 miles of track that spans Canada and middle America, from the Atlantic and Pacific oceans to the Gulf of Mexico. It sports a yield of 1.7% and trades at 14 times forward earnings.

TransCanada Corp. (TRP) is a Calgary based oil and gas pipeline company which yields 4.2%. The stock trades at 17 times forward earnings.

In the financial sector, Royal Bank of Canada (RY) is one of Canada's major banks, based in Toronto, Ontario and provides a favorable yield of 5%. The stock trades at 9 times forward earnings.

For a list of over fifteen high yield Canada stocks, which can be downloaded, sorted, and updated, go to WallStreetNewsNetwork.com.