Did you happen to see the Victoria's Secret fashion show on TV the other night? Supermodel Miranda Kerr wore a $2.5 million diamond-studded bra. Who can afford such apparel? Well, Gisele Bündchen, the richest supermodel in the world, for one.

Gisele, the wife of football star Tom Brady, is still in first place in terms of supermodel earnings, making approximately $45 million per year. Heidi Klum is in second place at $20 million, with Kate Moss in third place at $13.5 million. In fourth place is Adriana Lima at $8 million and Alessandra Ambrosio with $5 million per year according to Forbes.

Gisele, who receives most of her income in euros and Brazilian reals, is a celebrity endorser and spokesperson for numerous products of many publicly traded companies. If you look at these companies and build them into the form of a stock index, you can see how Gisele's stocks compare to stocks in general. 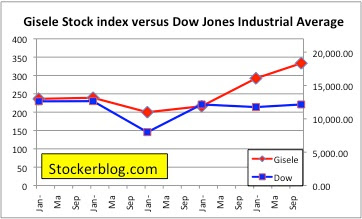 Tracking the stocks she is connected with from January of 2007, the Gisele Bundchen Stock Index has substantially outperformed the Dow Jones Industrial Average.

A selection of the stocks in her index include:

News Corp. (NWSA) Starred in the comedy, Taxi, in her movie debut, and The Devil Wears Prada, both produced by 20th Century Fox, a division of News Corp.

Apple (AAPL) used to be part of the index because Gisele Bundchen appeared on the 'Get a Mac' advertisements to promote the new line of Macintosh's a few years ago. If Apple was still in the index, her return would be significantly higher.

Assumptions:
The Gisele Index is a price-weighted index, similar to the Dow Jones Industrial Average. It includes reinvested dividends.

Disclosure: Author owned DIS, NWSA, and AAPL at the time the article was written. No celebrity endorsement expressed or implied.

Could not locate it.

On the WallStreetNewsNetwork.com website, scroll down about halfway down the page. The link will be on the left hand side, between German High Yield Stocks and Gold and Silver ETFs.