Robot Stocks: The Next Big Industry 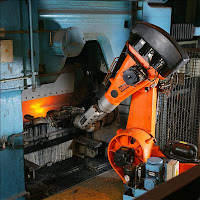 If you are looking for the next big industry, it won't be in smart phones, tablets, or smart TV sets. It will most likely be in robotics. Companies that use robots for manufacturing have numerous and obvious advantages over just hiring employees. Robots don't form unions and usually don't get hurt on the job. And if they do, they won't file a workers comp claim. No bonuses or pay raises either.
So are there robot companies you can invest in? A lot depends on what you call a robot company. Are flying drones, artificial heart valves, or 3D printers considered to be robots? Are companies that use a lot of robots considered a robotics company? How about a company that has robotics as a very small part of its business. If you include the stocks of all those companies, then there are over 60 robot stocks available to invest in according to WallStreetNewsNetwork.com.
ABB Ltd. (ABB), which trades on the New York Stock Exchange, is a Swiss company that has installed over 190,000 robots around the world. It is also involved in the production of power and low voltage products. The stock trades at 16 times current earnings and 13.5 times forward earnings. In addition, it pays a generous yield of 3.4%, payable quarterly. Earnings for the latest reported quarter were off by less than 4% on a 4.4% rise in revenues. The company has 5.45 billion in cash amounting to cash per share of 2.38. Total debt is $9.08 billion.
iRobot (IRBT) is more of a pure play in robotics, and not just because it has the word 'robot' in its name. Based in Bedford, Massachusetts, it makes everything from the Roomba vacuum cleaner to the PackBot police and military robot. In addition to consumer home and military products, it is also involved in medical robots and underwater research robots. The stock trades at 15.5 times trailing earnings and 25.5 times forward earnings. Latest quarterly earnings were up 8.2% on a 4.9% rise in revenues. This debt-free company has $6.84 in cash per share. The stock trades on NASDAQ.
Adept Technology (ADEP) is another robotics company, this one based in Pleasanton, California. In addition to the robot hardware, it is also involved in the software and vision side of the robotics industry. The company generated losses for the latest quarter. It carries debt of $4 million but has over 12.7 million in cash.
If you are interested in a free list of all the companies involved in robots, which includes price earnings information along with company info, go to WallStreetNewsNetwork.com.
Disclosure: Author didn't own any of the above at the time the article was written. By Stockerblog.com

Posted by Stockerblog at 4:17 PM