Justin Bieber is the extremely popular young Canadian singer who recently appeared as a lead performer on the Victoria's Secret Fashion Show on CBS (CBS). Since he was discovered on YouTube just a few years ago (where he appears in one of the most viewed videos in history), over 12 million of his albums have been sold. He also has more Twitter followers than any other person except for Lady Gaga.

One interesting aspect of famous and very popular celebrities, is that they can have an effect on the sales of the companies that they are connected with, such as television networks, record label, motion picture production companies, and companies with celebrity endorsements. If you take the prices of the stocks of those companies, an index can be defined which can be compared against a major stock index, such as the Dow Jones Industrial Average. 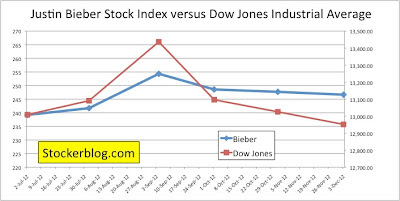 The stocks that Justin Bieber is connected with, when put into an index, is up 3.1% for the last six months, versus the Dow Jones Industrial Average, which is down 0.4%. Here are Bieber's stock connections:

Justin Bieber's record label is Island Records, a division of Universal Music Group, which is a subsidiary of Vivendi (VIVHY).

With Disney (DIS), he has a lot of connections. A Dancing with the Stars performer on ABC, a Disney Parks Christmas Day Parade performer, a So Random! performer, and an Extreme Makeover: Home Edition guest appearance, all Disney shows.

Viacom (VIA) is another big connection; he was in the School Gyrls film cast and True Jackson, VP both on Nickelodeon. Also, Justin Bieber: Never Say Never film, a Punk'd punker and a Silent Library game show contestant, both on MTV, a subsidiary of Viacom.

In addition to appearing on the Victoria's Secret Fashion Show on CBS (CBS), he was also on CSI: Crime Scene Investigation, another CBS show.

Of course, we can't forget the One Less Lonely Girl nail polish with the Justin Bieber endorsement sold exclusively at Wal-Mart (WMT).

For a free list of stocks in the Justin Bieber Stock Index, go to WallStreetNewsNetwork.com.

The Justin Bieber Index is a price-weighted index, similar to the Dow Jones Industrial Average. It includes reinvested dividends.

Disclosure: Author owned DIS at the time the article was written. No celebrity endorsement expressed or implied. The Celebrity Stock Index™ concept was developed by Fred Fuld III, former investment advisor, options market maker, vice president of a San Francisco money management firm, and university faculty member. He is the author of several investment books and is a contributor to numerous publications, including TheStreet.com, SeekingAlpha, and Nutricula Magazine.

Posted by Stockerblog at 1:55 AM