What's Been Happening with the Boombotix Startup

We have been running a series of interviews and articles on startups, and one of them that we have been following is Boombotix, the maker of very portable very high quality speakers. Earlier this year, we did an interview with the founder of the company. Then during the summer, we provided the news about the infusion of funds Boombotix received from venture capitalists.

We thought we would check on this startup to see how it is doing. They are now featured on Kickstarter.com with their latest product, the Boombotix REX, a six-sided speaker that has wireless playback, dual drivers, a bass woofer, is rugged and water resistant. It even has a build-in microphone. 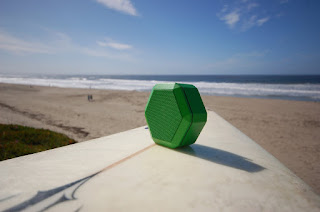 Kickstarter, in case you are not aware, is a web site that allows people to donate money to companies and individuals for various projects. The donations are not investments, but donors usually receive products in return for their contributions. It's a way for people to raise money and get free advertising. Goals are set, and the funds aren't released to the money raisers until the goal is achieved. The listings are generally for a month.

So how have they done? They reached their goal of $27,000 in only two days. It's only been five days and they are now over fifty grand in funds raised, far exceeding their goal, plus the listing still has more than a month to go.

More information can be found about Boombotix at the company's website, Boombotix.com.

Posted by Stockerblog at 1:50 PM