Since 2007, I have been tracking the stocks connected to celebrities and put them in the form of celebrity stock indexes. (Is the plural of index indexes or indices? Actually, both are correct.) The connection can be anything from being the celebrity endorser for a company's products to starring in a film of a movie studio company. I recently updated the indexes for several actresses and supermodels, and the returns have been outstanding, compared to the Dow Jones Industrial Average. 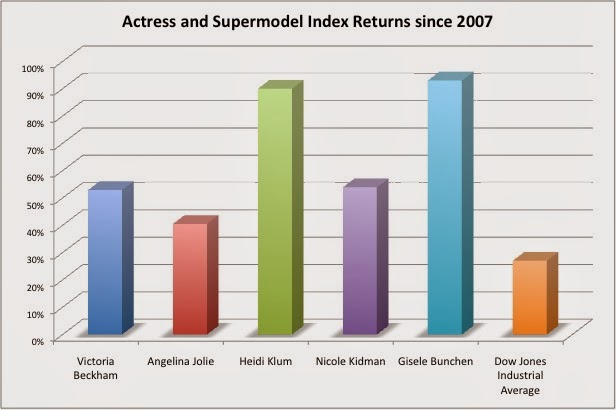 Last week, I wrote about how the Gisele Bündchen Stock Index was up 93% since 2007, compared to the Dow which was up 27%. Gisele is the famous and wealthy fashion model and actress, who is also a celebrity endorser of many products.


One of the other entertainers with an index is Victoria Beckham, also known as Posh Spice. Her index was up 53% over the last seven years. A couple of her stocks include Iconix Brand Group (ICON), which owns Rocawear, the urban clothing label for which she provided a celebrity endorsement, and V.F. Corporation (VFC), which owns Rock and Republic Enterprises, Inc., which has a range of jeans and other clothing created by Victoria Beckham.

Angelina Jolie, who is considered to be the the country's highest paid actress, also has a significant return on her index, up 40.5%. Her stocks include LVMH Moët Hennessy (LVMUY), for which she was the face of Louis Vuitton in 2011, a campaign that reportedly earned her approximately $10 million. Other stocks in the index include the studios that distributed films she starred, such as Time Warner (TWX) and Comcast (CMCSA).


The supermodel Heidi Klum has an index that rose 90.5%. She has been the spokesperson for McDonalds (MCD), Target (TGT), and Nike (NKE).


Nicole Kidman, who's index was up 53.9%, has starred in numerous films, and the motion picture distributors include Time Warner's (TWX) Warner Brother's which distributed Margot at the Wedding, The Invasion, Happy Feet, in which she did a voiceover, Eyes Wide Shut, Fur, plus the New Line Cinema division's The Golden Compass. Another Nicole stock is Disney (DIS). Its division, Miramax, distributed Cold Mountain, The Human Stain, and The Hours, all of which she starred in.

For a list of all the stocks in the celebrity stock indices, which includes the connection to the celebrity, go to WallStreetNewsNetwork.com.

Author owned MCD, TWX, and DIS at the time the article was written. Angelina Jolie picture courtesy US Government/ Wikipedia. No celebrity endorsement expressed or implied.