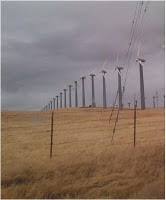 It was twenty years ago, on April 22, 1970, when U.S. Senator Gaylord Nelson founded Earth Day, for environmental awareness and appreciation of the Earth. Earth Day, which is celebrated in over 175 countries every year, has inspired many countries to become environmentally conscious and to develop and produce alternative sources of energy, other than the polluting oil and coal fuels.

Many of the alternative energy stocks have suffered in price during the last year, primarily due to reduced subsidies, higher costs, and increased competition. However, this may have created a buying opportunity, especially for investors who are look for green stocks for the long term.

There are numerous solar energy stocks to pick from, but very few large solar companies. The one with the greatest market cap and considered a leader in its field is First Solar (FSLR), which differentiates itself from other solar companies in that it is the major producer of cadmium telluride solar panels, as opposed to the more common silicon panels. The company, which is the largest manufacturer of thin-film cells in the world, has a market capitalization of $11.4 billion.

Quarter: First Solar will announce its latest quarter earnings on April 28. However, for the previous quarter, the fourth-quarter profit was up 6.7%, amounting to $7.53 per share, as revenue grew 47.9%. The company holds a substantial $784 million of cash and $176 million of debt.

Stock: It has drop 4.1% in the past year, grossly underperforming the S&P 500 which was up over 43%. It trades at a forward price-to-projected-earnings ratio of 18.2, a price-to-sales ratio of 5.5 and a very favorable price-earnings-growth ratio of 0.89.

Consensus: Of the analysts covering the stock, 21, or 47%, advise purchasing its shares with either a Strong Buy or a Buy recommendations, 17 recommend holding the shares, and six give it a Sell or Underperform rating. The analysts' mean price target for the stock is 135.86.

Quarter: Record revenues were reported for the latest quarter ending December 31, jumping 95.1%. The company also reported $0.11 per diluted share for the quarter, versus a loss for the same quarter last year.

Stock: The stock has been on a tear this year, rising 42.8%, slightly outperforming the S&P 500. It carries a 25.7 forward PE ratio and a PEG ratio which unfortunately is a bit on the high side at 2.22.

Consensus: Deutche Bank recently upgraded the stock to a Buy, believing that the shares could double. In the last year, the stock has received Buy upgrades from Jefferies, Needham, Kaufman Bros., and Piper Jaffray.

The leading geothermal company is Ormat Technologies Inc. (ORA). In addition to generating electricity from their own geothermal wells, they also make and market equipment for geothermal and recovered energy-based electricity generation. Ormat ios currently subject to a class action lawsuit relating to the reporting of earnings.

Quarter: The company will announce its first quarter 2010 earnings on Wednesday, May 5, 2010. Previous quarter's earnings were a 168% increase on a slight drop in revenues.

Consensus: Ormat was just upgraded by Avondale from Market Perform to Market Outperform. Five out of 16 analysts believe that it is a Buy or a Strong Buy, ten think it is a Hold, and one ranks it an Underperform.

If you like green stocks, you can find several free downloadable Excel databases of various green stocks at WallStreetNewsNetwork.com.