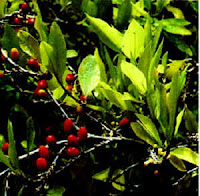 The new Coca Colla drink produced in Bolivia gives new meaning to the old saying "It's the Real Thing." The drink, which comes in a red label bottle, is made with coca leaves. Coca is also the primary ingredient of cocaine.

The drink is fully supported by the new president of Bolivia, Evo Morales. No word yet on the opinion of the drink from Coca Cola (KO), which trades on the New York Stock Exchange.

Email ThisBlogThis!Share to TwitterShare to FacebookShare to Pinterest
Labels: KO

Bolivia has signed eight WIPO treaties and the Bolivian manufacturer as a nominative brand have arguments to defend the trademark, since the drink is manufactured on the basis of the Coca plant Bolivia will be the first country to attend the legal disputes, as the opposition to the Mark registration and the trademark infringement by Coca Cola. Source: http://www.registrosdemarcas.com/

thx u very much, i learn a lot