At least she can invest in beer stocks in the mean time. According to a free recently updated list at WallStreetNewsNetwork.com, there are over ten publicly traded breweries and beer retailers. In addition, half a dozen of the beer stocks pay dividends, ranging up to almost 3%.

One example is Anheuser-Busch InBev (BUD), which has the memorable stock symbol representing its popular Budweiser brand. It also sells Stella Artois, Beck's, Leffe, Bud Light, Skol, Brahma, Quilmes, Michelob, and many other brands. The stock has a current price to earnings ratio of 20, a forward PE of 14, and a 1.44 PEG. The stock sports a yield of 1.6%.

Another dividend paying brewery is Molson Coors Brewing Company (TAP), a Canadian based company that markets the Coors Light, Molson, Carling, Pilsner, Keystone Light, and Granville Island brands. The stock trades at 14 times current earnings and 12 times forward earnings, with a reasonable price to earnings growth ratio of 2.29. In addition, the company pays a decent CD beating yield of 2.9%.

Heineken NV (HINKY.PK) pays a yield of 2.4% and trades at 13 times forward earnings. 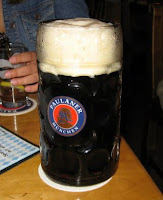 If you are looking for more beer stock ideas, check out the free list at WallStreetNewsNetwork.com, which can be updated, sorted, and downloaded.