Her Royal Highness Princess William, Duchess of Cambridge, Countess of Strathearn, Baroness Carrickfergus is the official name of Catherine 'Kate' Middleton, the wife of Prince William. Ever since their engagement was announced on November 16, 2010, news on the couple, and more specifically Kate, has been constant: what she's wearing, where she's going, what she's doing. The marriage has been a boon to the press, especially the British publications, such as The Times and The Sun, published by News Corporation (NWS) (NWSA).

It is not just the newspapers that are benefiting from all the publicity surrounding Kate. Look what has happened with the clothing retailers whenever Kate buys another dress. Web site hits have skyrocketed and inventory was cleaned out at many dress stores. As a matter of fact, when Kate wore a dress from Reiss to meet President and Mrs. Obama, the company website crashed due to the influx of orders.

Reiss is a privately held company, but there are several publicly companies that have benefited from the 'Kate Effect'. When Kate wore a beige trenchcoat from Burberry (BRBY.L) on her trip to Belfast in March, sales spiked and the trenchcoat sold out. Burberry, which also makes perfume and accessories in addition to clothing, has been around since 1856. The stock is part of the FTSE 100 Index.

Kate has also worn lots of French Connection (FCCN.L) clothing, including tops and dresses. French Connection, also known as FCUK, was founded in 1972 and trades on the London Stock Exchange.

Alexander McQueen dresses designed by Sarah Burton on Kate are a common site. The company is a luxury fashion house founded by designer Alexander McQueen, and is a Subsidiary of PPR (PP.PA), a French holding company that specializing in retail shops and luxury brands. The company was started in 1963 and the stock trades on Euronext Paris and is a part of the CAC 40 index.

Even entrepreneurs are taking advantage of the Royal Wedding through eBay (EBAY). If you do a search on eBay for Kate Middleton, you will find a couple thousand items, everything from magazines to photographs to jewelry to dolls! eBay trades on NASDAQ and trades at 13 times forward earnings. Speaking of entrepreneurs, Kate's parents started their own party supply company, called Party Pieces, back in 1987. Since the wedding news, company sales have grown enormously. Sorry, you can't buy stock in it, it's a private company.

Show business is getting in on the act. Two movies have been made about the wedding. The first was a Lifetime movie called William & Kate. Lifetime is owned by A&E Television Networks, which is owned partially by Disney (DIS). Disney trades at 11.5 times forward earnings and yields 1.6%.

The second movie was William & Catherine: A Royal Romance, which was distributed by the Hallmark Channel. Hallmark is owned by the California based media production company, Crown Media Holdings, Inc. (CRWN). [Crown Media? That's an interesting coincidence.]

Many celebrities have an effect on companies that they are connected with in some way, whether the celebrity is a supermodel, such as Gisele Bunchen, an actress like Angelina Jolie, or just a celebrity for unknown reasons, such as Paris Hilton. Examining all the companies that Kate is connected with, an analysis can be made showing how the Kate stocks compare to stock indexes. If you look at the chart below, you will see the one-year time frame from the date of her engagement announcement. The Kate Index is the blue line on top. 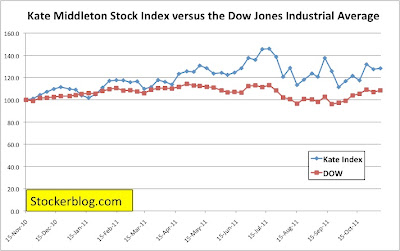 As you can see, the Kate Middleton Stock Index has greatly outperformed the Dow Jones Industrial Average. During those twelve months, the Kate Index was up 18.1% versus the Dow, which was up only 10.9%.

To see a free list of the stocks in the Kate Middleton Stock Index, which includes some financial information on the companies, go to WallStreetNewsNetwork.com. The list can be downloaded, sorted, and updated.

Disclosure: Author owned DIS and EBAY at the time the article was written.

By Fred Fuld III at Stockerblog.com
Posted by Stockerblog at 12:31 AM