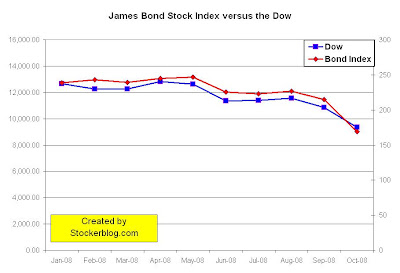 Quantum Of Solace, the latest James Bond movie, starring Daniel Craig and Olga Kurylenko, was released in the United Kingdom on October 31, and is supposed to have more product placements than any other James Bond movie. There are many publicly traded companies that have paid to have their product appear in the film and several companies that benefit from the Bond movie. Stockerblog has put together the James Bond Stock Index.

Here are the components of the index:

Ford Motor (F) for the Aston Martin, and the Ford Car that Camille drives.


Assumptions:
This is a price-weighted index, similar to the Dow Jones Industrial Average.
Dividends were included.

Other celebrity indexes worth checking out: