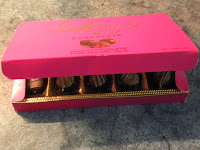 What is it about chocolate and medical cures? Chocolate benefits keep appearing regularly. It supposedly reduces wrinkles and aging according to Barry Callebaut AG (BYCBF.PK) the large chocolate maker, and it is even good for your liver. Chocolate has even helped Warren Buffett's Berkshire Hathaway (BRK-A) (BRK-B) stock portfolio.

Now British scientists are working on developing a persistent cough remedy made out of chocolate. A company called SEEK, which is not publicly traded, is working on creating a drug called BC1036 which utilizes theobromine, a major ingredient in chocolate and cocoa.

Fortunately, there are several stocks with a significant exposure to chocolate, a few with dividends. Here are a couple that may be worth sinking your teeth into.

Hershey (HSY), founded in 1894 is the largest manufacturer of chocolate in North America and one of the largest candy companies in the world. Hershey's Kisses were invented in 1901 and their chocolate chips were released in 1928. The stock has a price to earnings ratio of 22, a forward PE of 17, with a delicious yield of 2.7%. It sports a price earnings growth ratio of 2.14.

Rocky Mountain Chocolate Factory Inc. (RMCF) based in Durango, Colorado, which makes and markets caramels, creams, mints, and truffles. The company, which was founded in 1981, has over 300 franchise locations in 40 states, along with Canada and the United Arab Emirates. The P/E is 15.4, and the company pays a very tasty yield of 4.2%.

If you want to see a free Excel list of all the publicly traded chocolate stocks, which can be downloaded, sorted, and updated, go to WallStreetNewsNetwork.com.

LOL, good find. And popular. You're right. Anything to justify more chocolate in the diet!