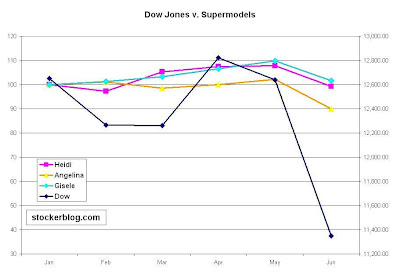 Three top celebrities, Gisele Bündchen, Heidi Klum, and Angelina Jolie, all of which had celebrity stock indexes created by Fred Fuld at Stockerblog.com and implemented a Stockpickr.com, have had their indexes updated and compared to the Dow Jones Industrial Average. The one thing that these three women have in common, other than the fact that they are wealthy, successful celebrities [two supermodels and one movie star who was also a model], is that all three of their indexes have outperformed the Dow over the last six months.

Their indexes are based on the companies that they are connected to in some way, such as acting as celebrity spokesperson. Over the last six months, Gisele Bündchen's index was up 1.6%, Heidi Klum's index was down only 0.7%, and Angelina Jolie's index was down 10%, yet all were better than the Dow which was down 10.3%. Their portfolios are as follows:

Assumptions:
These are price-weighted indexes, similar to the Dow Jones Industrial Average.
Dividends were included.